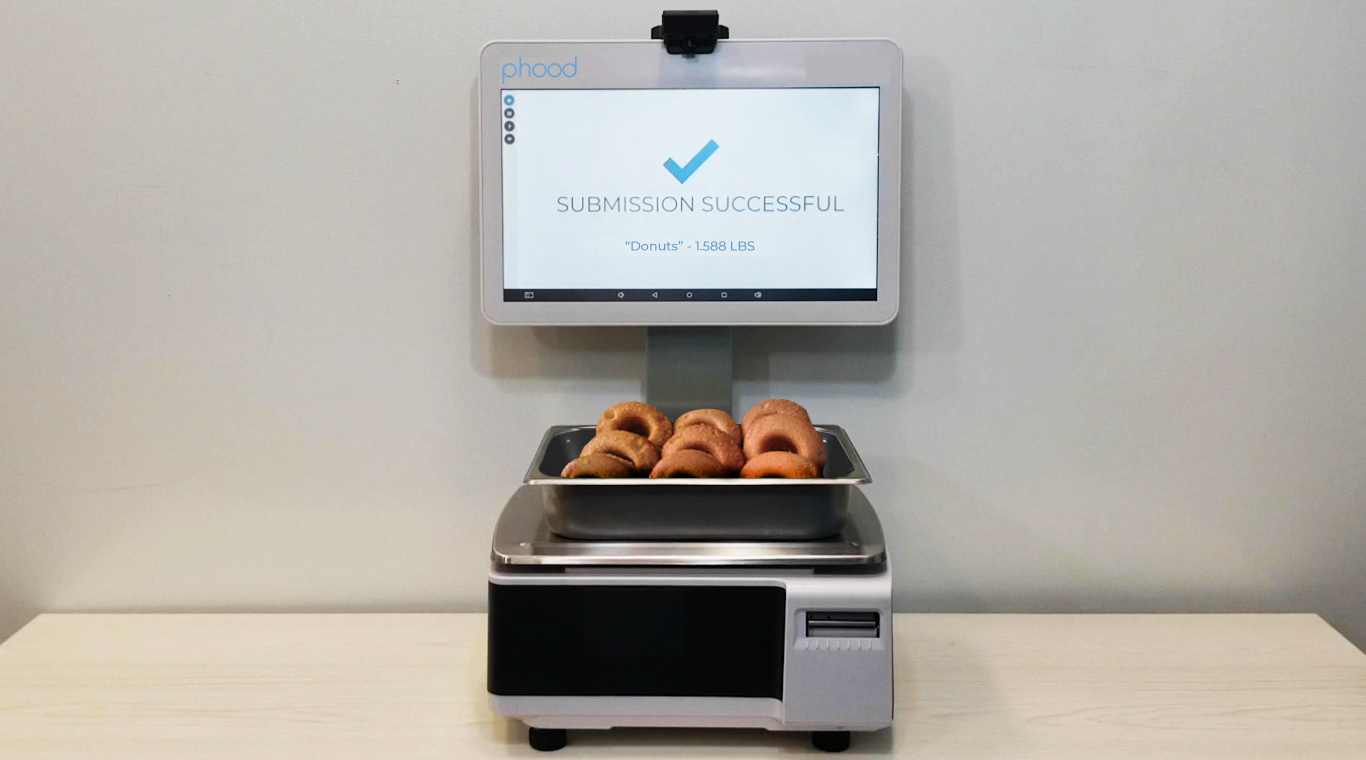 Picture your local salad bar either at your school, grocery store or office. There are many options between the greens, toppings and dressings. At the end of each day, it’s the job of a kitchen worker to perform a “shrink analysis” on each ingredient — manually identifying, weighing and recording the leftover volume of each item. By comparing that number to initial inventory amounts, the kitchen tracks its food waste.

The process is a big hassle for the prepared food sector, but food waste is an even bigger problem for the planet, accounting for 8 percent of greenhouse gas emissions according to the U.N. Food and Agriculture Organization. Phood CEO Luc Dang hopes to solve both.

Phood’s main product, PhoodX, is a combination scale and camera that uses artificial intelligence and enhanced analytics to cut down on the time it takes to record data about the leftovers. The system uses that information to recommend changes within foodservice operations aimed at reducing food waste.

The technology is most appropriate in places where items are sold by weight, such as dining halls or the prepared food sections of grocery stores. The Phood system is integrated directly with the inventory system so it can use the data to calculate waste compared to the sold volume. Phood’s devices have been used in dining halls at Yale and Rhode Island School of Design, and in K-12 cafeterias. The company also has devices installed at 10 Whole Foods locations in Massachusetts, Connecticut and Rhode Island.

Even before Dang was infiltrating the foodservice industry of the North Atlantic region, he had a deep understanding of the agricultural supply chain from growing up on a small Connecticut farm. After working a few years in the financial sector, he read a statistic estimating that 40 percent of food is wasted. Dang couldn’t believe that headline: During his childhood on farms and near restaurants, he hadn’t noticed anything like that kind of waste. But when Dang called friends and restaurants that used to buy from his family farm, they told him they composted everything but didn’t and couldn’t actually track waste empirically.

Is it an operational management issue? Is it overproduction? Is it a weekend or weekday issue? Or expiration issues? Or a spoilage issue? We can identify each of those key areas and really drill down and cut back.

According to Dang, the time-consuming, arduous and convoluted traditional method of tracking food waste is standard in about 85 percent of foodservice operations. The headline was right: According to data from Phood, most foodservice organizations throw away between 35 and 65 percent of their ingredient purchases.

According to Dang, Phood can reduce that food waste by 50 percent with a bonus of saving the kitchen staff time. The company said the algorithm, trained using millions of food items recognized by Amazon Rekognition and Google Cloud Vision, can identify food items with 98 percent accuracy in two to three seconds.

Aside from the relationships mentioned earlier, Phood recently started a partnership with two large food giants, Cargill and Gordon Food Service, which will see the system used in more kitchens, giving it access to more data to improve its artificial intelligence.

The real value of Phood’s device isn’t the time-saving AI, it’s the data harvested from the device, which helps uncover habits that contribute to a business’s food waste issue, Dang said.

“Is it an operational management issue? Is it overproduction? Is it a weekend or weekday issue? Or expiration issues? Or a spoilage issue?” he said. “We can identify each of those key areas and really drill down and cut back.”

Many foodservice businesses tout their composting policies and donation rates for leftover food, but that doesn’t really address the bigger issue — wasting food in the first place. According to the U.S. Environmental Protection Agency, composting isn’t much better than sending food to the landfill. Phood is helping companies attack the problem at the top of the food chain — source reduction — by helping operations become better informed about consumption habits.

According to Dang, many parts of an industrial kitchen are siloed. The person ordering ingredients is different from the chef doing the cooking, which is not the same person recording the leftovers at the end of the day. And rarely are these individuals informed about the details of each other’s step in the process, so the purchasing and production habits never get adjusted.

Phood becomes a centralized system that connects each step. Dang suggests a three-week period of baseline analysis when customers first start using the system, but often they start making changes to their ordering earlier, he said.

“They start leveraging those insights and changing their ordering by week two,” Dang said. “We’ve seen waste reductions occur from the first week.”

The food and restaurant business has extremely thin margins, and few companies have had access to this degree of detail before. Aside from cutting back on waste, Phood can help operations save money, which is often the impetus for an investment. Because source reduction has such strong economic benefits, the sustainability aspect gets to tag along. According to Dang, Phood can save up to 10 percent on annual food costs.