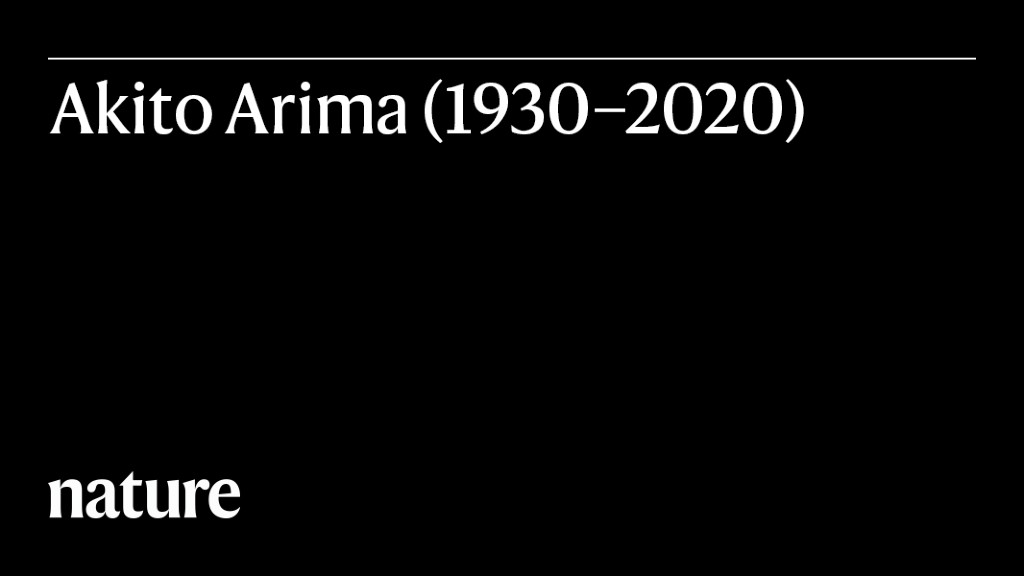 The Japanese theoretical physicist Akito Arima helped to create a model that radically simplified the representation of the atomic nucleus. As president of Japan’s University of Tokyo and of RIKEN, and as a government adviser and minister, he modernized Japanese science and promoted centres of excellence in advanced research. He has died, aged 90.

Arima’s 1974 model, created jointly with Italian colleague Francesco Iachello, treated each pair of protons and neutrons, collectively called nucleons, as one particle — a boson with an angular momentum of either 0 or 2. Arima and Iachello refined the shell model, in which the binding energy of each nucleon is affected by the number of nucleons. Using that model, calculating the binding energy or spin for nucleons at low energies becomes intractable for heavier nuclei, because of the sheer number of possible states. Arima and Iachello’s interacting-boson model collapsed the number of possible states by orders of magnitude.

Born in Osaka in 1930, Arima was educated at a private secondary school in Tokyo that accelerated students who were achieving ahead of their age group. He got his doctorate in 1958 from the University of Tokyo, where he became a full professor in 1975, having started his career in 1956 at the university’s Institute for Nuclear Studies.

He and Iachello extended their ideas on nuclear structure, and in 1987, co-authored The Interacting Boson Model, which presents the mathematical techniques used to analyse the structure of the model. The book also collects in a single, easily accessible reference all the formulae that had been developed over the years to account for collective properties of nuclei.

A research position at Argonne National Laboratory in Chicago, Illinois, a visiting professorship at Rutgers University in New Jersey and a full professorship at Stony Brook University in New York showed Arima “the zeal for education at American universities … as well as the rigorous evaluation system”. He felt that facilities for physics in Japan were poor by comparison, and that the level of government funding bore little relation to the quality of the work produced.

In 1991, As president of the University of Tokyo, he confronted the minister of education and other politicians about the conditions in his public university, in breach of Japanese conventions of deference. In a further radical act, he invited a panel of overseas scientists to review the buildings and resources of the physics department, which highlighted their deficiencies (see Nature 362, 387; 1993). By the end of his four-year term, he had won funding for new buildings and equipment. Reviews by international scientists soon became standard in Japan.

In 1993, Arima became president of RIKEN, Japan’s multi-campus scientific research institute. He continued to lobby the government, with other forward-looking colleagues, for a law to inject substantial funding into Japanese science through 5-year plans. Japan’s Basic Law for Science and Technology came into force on 15 November 1995, and was implemented in the budget of 1997. As part of the first 5-year plan, he doubled the number of postdoctoral fellows in Japan to 10,000 by the end of the 1990s.

After five years as a government adviser, Arima was elected as a member of the upper house of the Diet (parliament) in 1998. He was both minister for education and state minister of science and technology under Prime Minister Keizo Obuchi (1998–2000). On his watch, Japanese universities moved towards incorporation as semi-public corporate agencies with some degree of independence from government. He published proposals for shorter weeks and lighter curricula for schoolchildren, and introduced a system for high-achieving secondary schoolchildren to jump ahead a year. But his greatest achievements were in university reform, including the strengthening of graduate programmes and corporate sponsorship of research.

Having met resistance from faculty and government officials to the internationalization of Japan’s institutions, he collaborated with politician Omi Kōji from 2001 to set up the Okinawa Institute of Science and Technology Graduate University (OIST) to create a truly international university in a green field site. The president of the OIST Promotion Corporation that led to the establishment of OIST in 2011 was the Nobel prizewinner and molecular biologist Sydney Brenner. Now helming OIST is Peter Gruss, former president of Germany’s Max Planck Society. More than half of the faculty and students who pursue interdisciplinary PhD programmes at OIST are international, and the language of instruction is English. Arima also promoted scientific cooperation between Japan and China; he held honorary posts at several Chinese universities.

From an early age, Arima studied the Japanese poetic form haiku. He published numerous poetry books, including Einstein’s Century (in English translation). Speaking in 2012 at the Fifth Haiku Pacific Rim Conference, he explained to fellow poet Michele Root-Bernstein that when stuck on a physics problem, he would turn his mind to gigantic scenery or the beautiful song of an insect. “I write a haiku,” he said, “then I can suddenly find the heart of a secret of nature.”

In the same interview, he commented that his interest in many-body problems in physics did not translate well when the bodies were human beings. “Don’t go into administration,” he joked, “there’s no reward at all.”