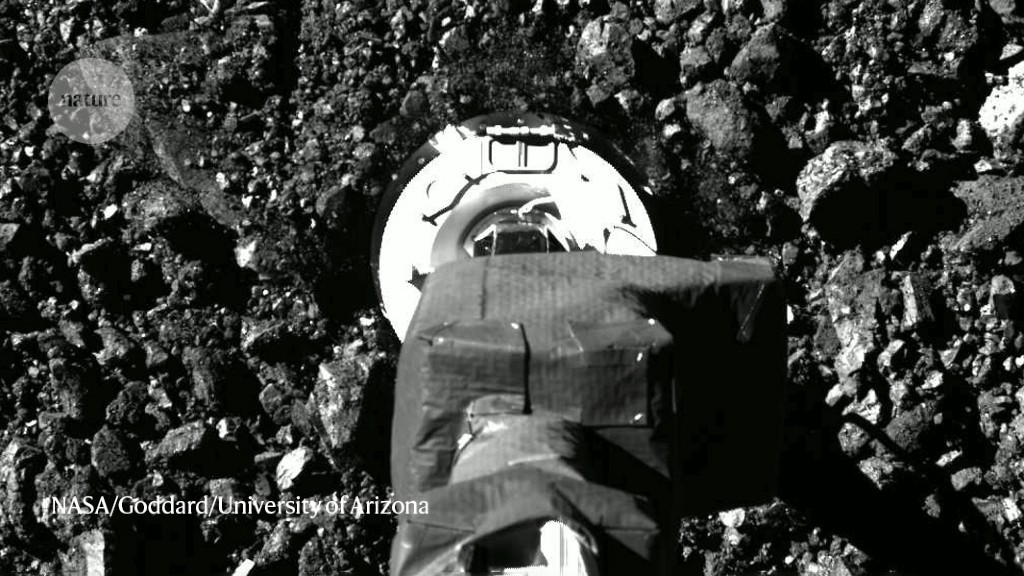 NASA’s OSIRIS-REx mission exceeded expectations when it grabbed rocks and dirt off the surface of the asteroid Bennu on 20 October. The spacecraft gathered so much material that several rocks got stuck in its collecting mechanism, wedging it open and allowing smaller particles to drift into space. Mission managers accelerated plans for the spacecraft to stow the gathered material inside a canister, to reduce the amount lost.

OSIRIS-REx touched Bennu for 6 seconds, when its collecting device plunged as far as 48 centimetres into the asteroid’s rubbly surface (pictured). Images from the spacecraft’s cameras show that the collector is full of material, much more than the 60-gram minimum it had aimed to pick up. To prevent more losses, the spacecraft will skip a manoeuvre in which it was to spin itself around to weigh the collected material. Scientists won’t know how much asteroid rubble OSIRIS-REx ultimately gathered until the particles come back to Earth in 2023.

The mission is NASA’s first to gather samples from an asteroid. The space agency hopes to learn more about how asteroids formed and evolved from the specimens. The spacecraft will orbit Bennu until March 2021, when it will fly back to Earth.

In ‘pooled’ testing for SARS‑CoV-2, samples from multiple people are combined into one batch that is then analysed for the virus. Now, a large-scale trial has shown that pooled testing can be highly efficient — even more so than theory predicted.

Moran Yassour at the Hebrew University of Jerusalem and her colleagues tested 133,816 nose and throat samples by pooling either five or eight individual samples into one group sample (N. Barak et al. Preprint at medRxiv https://doi.org/ffkx; 2020). If a group tested positive, every constituent sample was retested. Groups that tested negative were not retested.

Using this method, the researchers required only one-quarter of the tests they would have needed to check every sample individually. They needed fewer tests than expected, because people from the same household, university, care home or hospital tend to get tested together, increasing the likelihood that positive samples are in the same groups. The findings have not yet been peer reviewed.

The publisher of Nature has agreed its first deal to allow some researchers to publish in the journal, and in 33 other Nature-branded titles, under open-access (OA) terms.

In April, publisher Springer Nature announced that it would offer OA publishing routes for its most selective journals that would comply with Plan S, a European-led initiative to open up the scientific literature. (Nature is editorially independent of its publisher.)

The German Max Planck Digital Library (MPDL) in Munich has negotiated the first such arrangement, which will start from 2021. The deal, announced on 20 October, is being offered to around 120 German institutions, and the first to sign up is the Max Planck Society.

Institutions that sign up will pay a lump sum allowing unlimited OA publishing of articles in the 34 journals; they will also be able to read those journals and a further 21 Nature Reviews titles. The sum is calculated on the basis of a price of €9,500 (US$11,200) per article. This is higher than the per-article OA fees charged by other selective journals, which are less than US$6,000.

The offer is “very attractive”, says Ralf Schimmer, head of information at the MPDL. But he acknowledges that the per-article price is unprecedented.

Some other OA advocates criticized the deal. The per‑article sum is “exorbitant”, and the deal does nothing to improve the accessibility of the scholarly publishing system, say Jeroen Bosman and Bianca Kramer, two librarians at Utrecht University in the Netherlands.