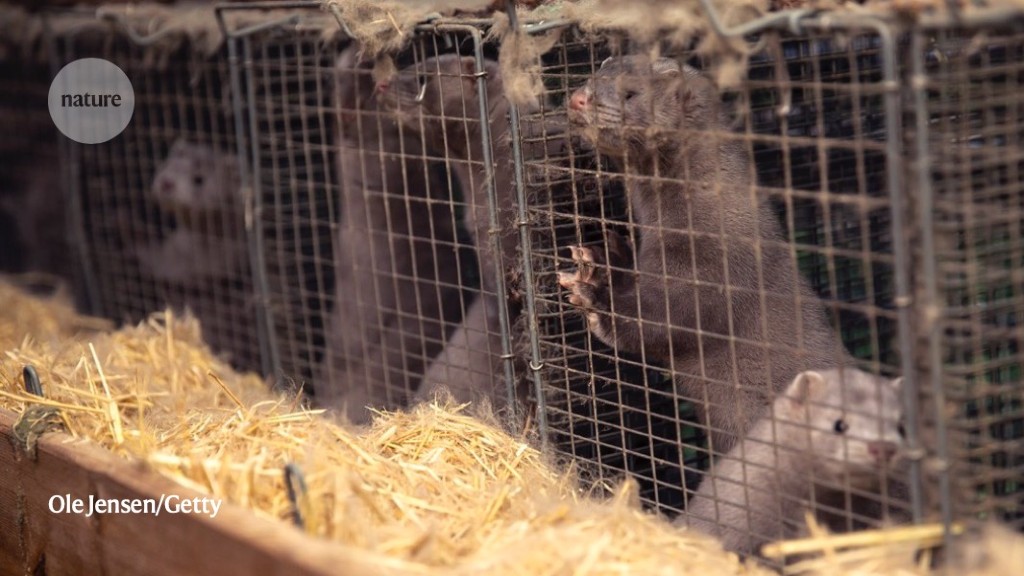 Health officials in Denmark have released genetic and experimental data on a cluster of SARS-CoV-2 mutations circulating in farmed mink and people, days after they announced the mutations could jeopardize the effectiveness of potential COVID-19 vaccines.

News of the mutations prompted the Danish Prime Minister Mette Frederiksen to announce on 4 November plans to end mink farming for the foreseeable future — and cull some 17 million animals — sparking a fierce debate about whether such action was legal. But scientists were careful not to raise the alarm until they saw the data.

Now, scientists who have reviewed the data say the mutations themselves aren’t particularly concerning because there is little evidence that they allow the virus to spread more easily among people, make it more deadly or will jeopardize therapeutics and vaccines. “The mink-associated mutations we know of are not associated with rapid spread, nor with any changes in morbidity and mortality,” says Astrid Iversen, a virologist at the University of Oxford, UK.

But researchers say culling the animals is probably necessary, given the virus’s rapid and uncontrolled spread in mink — detected in more than 200 farms since June — which makes the animals a massive viral source that can easily infect people. In regions with affected mink farms, the number of people with COVID-19 increases a lot, says Iversen. And there are roughly three times more mink than people in Denmark. “The mink cull is necessary,” she says.

Uncontrolled spread in mink also increases the opportunity for the virus to evolve and develop mutations that could be concerning, says Jannik Fonager, a virologist at Statens Serum Insitut, the Danish health authority leading the investigations, based in Copenhagen. He says scientists shared their concerns with the government, but that the government decided to cull the mink.

On 10 November, the government submitted legislation to enable the cull, and has urged farmers to begin the process.

Fonager says researchers in Denmark have sequenced viral samples from 40 mink farms and identified some 170 coronavirus variants. He adds that in viral samples from people — representing about one-fifth of the country’s total COVID confirmed cases — they’ve found some 300 variants in people that can be traced to minks, which means they contain mutations thought to have first emerged in mink. “That is something we really want to keep a close eye on.”

Of particular concern is a viral variant containing a unique combination of mutations called ‘Cluster-5’, which was found in 5 farms and 12 people in the North Jutland region in the country’s north. Fonager says the Cluster-5 variant causes three amino-acid changes and two deletions in the spike protein.

Preliminary cell experiments suggest that antibodies from some people who had recovered from COVID-19 found it more difficult to recognize the Cluster-5 variant than viruses that did not carry the Cluster-5 mutations. This suggests that the variant could be less responsive to antibody treatments or vaccines, and informed the government’s decision to cull the farmed mink, according to a letter from Denmark’s chief veterinary officer to the World Organization for Animal Health. “It is the right thing to do in a situation where the vaccine, which is currently the light at the end of a very dark tunnel, is in danger,” Danish minister for food and fisheries, Mogens Jensen, said in a public statement on 5 November.

But researchers who have reviewed the available data say these claims are speculative. The Cluster-5 variant seems to be a “dead end” in people because it hasn’t spread widely, says Iversen. Many of those who were infected worked on the farms and were probably exposed to a high viral dose. The variant has not been seen since September despite extensive sequencing and data sharing, she says.

Iversen adds that the experimental work is too limited to draw any conclusions about its implications for therapies and vaccines. “It is really important in this situation not to over-interpret very preliminary data.”

One mink-associated mutation has spread more widely in people. The mutation, Y453F, also encodes an amino acid change in the spike protein and has been found in about 300 sequences from people in Denmark, as well as sequences from mink and people in the Netherlands. An experimental study suggests that virus variants with the Y453F mutation escaped detection by a commercial monoclonal antibody.

But that does not mean that this mutation will hinder the drug’s therapeutic effect in the body, says Iversen.

It’s also not clear whether all the mink-associated mutations in people actually originated in mink, because not all the data have been released, says David Robertson, a virologist at the University of Glasgow, UK.

But there are some examples of mutations originating in mink and passing to people, says Kasper Lage, a computational biologist at Massachusetts General Hospital and the Broad Institute of MIT and Harvard in Boston. And many researchers are worried that uncontrolled spread of the virus through millions of mink could eventually lead to problematic mutations.

In Denmark, the world’s largest producer of mink pelts, authorities are struggling to control farm outbreaks, despite extensive control measures. In many affected farms, almost all animals have antibodies against the virus. Outbreaks have also been detected in mink farms in the Netherlands, Sweden, Spain, Italy and the United States. The Netherlands plans to cull its entire mink population by 2021, accelerating plans to end mink farming by 2024.

Scientists still don’t know how the virus is entering farms, says Anette Boklund, an epidemiologist and veterinarian at the University of Copenhagen. Her team has found low levels of viral RNA on houseflies, as well as in hair and air samples close to mink cages.

They have also tested wildlife in the region, including foxes, badgers, cats, and stone martens. The only positive wildlife sample was from a seagull’s foot. Infected farm workers are the most likely source, says Boklund.

REAL TIME – Corona Virus Statistical Data (Worldwide)
Automakers have battery anxiety, so they’re taking control of the supply
This Snake-Like Robot, Inspired By Plants, Can Burrow Through Sand And Soil
Deadly, Record-Shattering Heat Waves Expected in 2050 Due to Climate Change
Susan Su on how to approach growth as your startup raises each round
Recent Decline of the Monarch Butterfly Linked to Climate Change