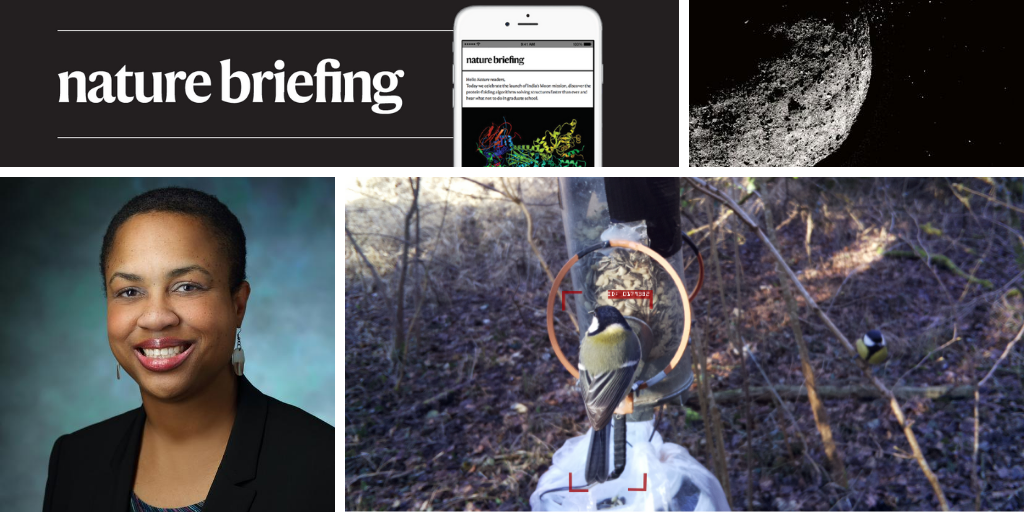 Researchers have trained an artificial-intelligence (AI) system to recognize individual small birds that appear identical. The tool could make ecological fieldwork easier, because scientists often have to catch and tag individual birds so that they can tell them apart. Researchers used feeders rigged with cameras to take the thousands of photos of microchipped birds that were needed to train the system. “Our study provides the means of overcoming one of the greatest limitations in the study of wild birds,” says ecologist André Ferreira.

A project to connect astronomy researchers into family trees on the basis of adviser–student lineages has officially launched, several years after it was first envisioned. The Astronomy Genealogy Project (AstroGen) will allow astronomers to investigate their own academic family tree, as well as enabling science historians and sociologists to study the astronomy community. “With information in the database, it is possible to compare numbers or careers of those earning astronomy-related doctorates for different countries, universities, or time periods,” says Joseph Tenn, AstroGen’s founder and director. The database goes back to 1766, and currently lists more than 28,000 people who have earned astronomy-related doctorates, plus another 5,000 scientists who advised them.

Power of virus-control campaign seen in pattern of symptoms

In China, a key metric of epidemics called the serial interval shrank drastically soon after the new coronavirus’s arrival — a finding that underscores the success of testing and isolation efforts. The serial interval is the average time between the onset of symptoms in a chain of people infected by a pathogen. Epidemiologists found that in China the serial interval plummeted from 7.8 days to 2.6 days over a 5-week period starting on 9 January. They say that early isolation of cases prevented transmission, leading to fewer cases and slowing the spread of the virus.

Infection rates in Dogs and cats mirror those of people

Cats and dogs are just as likely to be infected with SARS-CoV-2 as people are, according to a survey in northern Italy. Scientists took swabs from the noses, throats or rectums of 540 dogs and 277 cats between March and May. None of the pets tested positive for SARS-CoV-2 viral RNA, but in further tests of antibodies against the virus circulating in the blood of some animals, the researchers found that around 3% of dogs and 4% of cats showed evidence of previous infection.

Virus rips through school after mask usage is suspended

More than 150 students at an Israeli secondary school were infected by the coronavirus after students were allowed to remove their masks during a heatwave. Roughly 10 days after Israeli schools fully reopened on 17 May, two students at a secondary school in Jerusalem were diagnosed with COVID-19. The resulting outbreak infected 153 students and 25 members of staff. By mid-June, a further 87 cases had occurred among the close contacts of people infected through the school outbreak.

Get more of Nature’s continuously updated selection of the must-read papers and preprints on COVID-19.

NASA is days away from launching its Perseverance rover — the first step towards fulfilling a long-standing dream of planetary scientists. If everything goes to plan, Perseverance will arrive on Mars in February 2021 and drive around collecting samples of rock that — one day — other spacecraft will pick up and fly back to Earth. The rocks will become the first samples ever returned from the red planet. They will join a priceless collection of cosmic material brought back from other planetary bodies throughout the space age. From lunar rocks gathered by the Apollo astronauts to shards of a distant asteroid collected by robot spacecraft, these samples of other worlds have reshaped scientific study of the Solar System.

When Namandjé Bumpus declined to lead a new diversity initiative at a scientific society, a white colleague responded, “Why did we let you in, then?” Bumpus, who is the first Black woman to chair a department at the Johns Hopkins University School of Medicine, and the only one currently leading a department of pharmacology at any US medical school, describes the overt racism she experiences in academia, and how it is downplayed and excused by white scientists. “Leaders and faculty members must approach creating an anti-racist culture with the same vigour we apply to achieving every other dimension of scientific excellence,” she says.