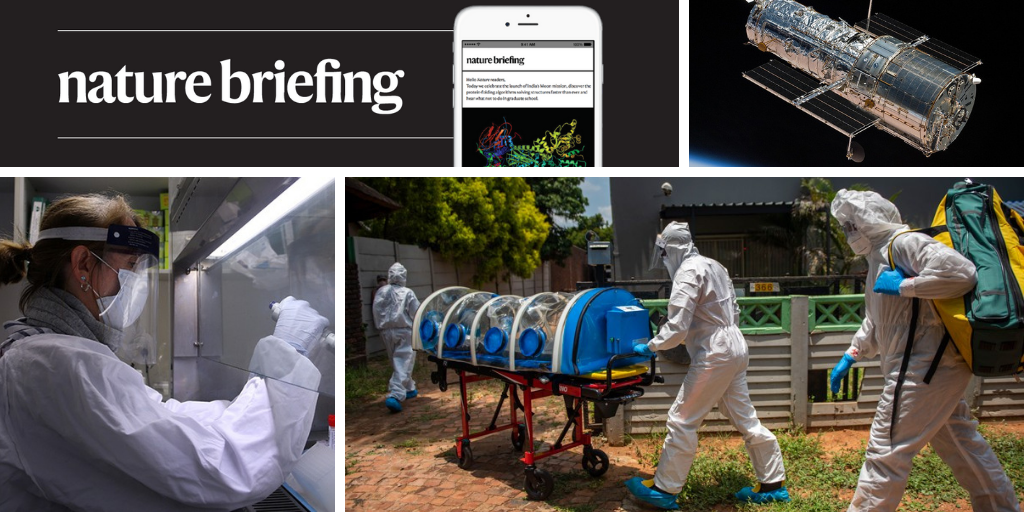 Hello Nature readers, would you like to get this Briefing in your inbox free every day? Sign up here.

Researchers are racing to track the rise of a new variant of SARS-CoV-2, known as known as B.1.1.529 or Omicron. The variant harbours a number of mutations found in other variants, including Delta, and seems to be spreading quickly across South Africa. A top priority is to follow the variant closely as it spreads: it was first identified in Botswana and has turned up in a traveller arriving in Hong Kong from South Africa. Scientists in South Africa are working “at warp speed” to understand the variant’s properties, says South African virologist Penny Moore. There are anecdotal reports of reinfections and cases in vaccinated individuals, but “at this stage it’s too early to tell anything”, she says.

Since NASA introduced a double-blind review system to reduce bias, the proportions both of first-time observers and of female principal investigators have increased. The application process was changed in 2018 so that neither the applicants nor the reviewers assessing their proposals are aware of each other’s identities. “I’m not saying this is the perfect system,” says astronomer Wolfgang Kerzendorf. “I believe it’s probably the best system for now.”

Men won more grants and were awarded more money than women in Australia’s largest grant-award programme, even though they applied at similar rates. Despite efforts to mitigate equity problems with its investigator grants, data from the latest round of funding suggest that the National Health and Medical Research Council still substantially favours men over women. As a result, nearly 6,000 people have signed a petition calling for the introduction of gender quotas.

How to give great hugs

Researchers have tried to study what makes one hug better than another in experimental and real-world settings and found that hugs that last five or ten seconds are rated as more pleasurable than a single-second squeeze. And a ‘crisscross’ style in which each hugger places one arm over the other hugger’s shoulder is the preferred form of hugging, especially in men.

In countries where average incomes and ages are lowest, the response to the coronavirus has ushered in “a shadow pandemic”, writes philosopher and writer Kwame Anthony Appiah. Where youth protects populations from the worst effects of COVID-19, the pandemic’s economic consequences mean that tenuous livelihoods are threatened and the killers of the young — such as HIV, malaria and TB — are on the rise. “The tale of two pandemics, then, is a tale of two international orders,” argues Appiah. “The post-pandemic challenge, in turn, is to take seriously the rhetoric of an ‘international community’, and integrate the two into one.”

Read more: How COVID is derailing the fight against HIV, TB and malaria (Nature | 4 min read, from September)

In this week’s helping of short stories for Nature’s Futures series:

• A weary scientist leaves a brutally warming world for a surprising destination in ‘Venetian blinds’.

• A conversation with tech support probes the depths of familial love in digital life-after-death in ‘EverLife’.

This week’s Nature Podcast looks at the magazine’s 2021 salary and satisfaction survey, NASA’s mission to shift an asteroid and efforts to make baby formula that more closely resembles human milk for those who can’t breastfeed.

“This is a starting point for a real discussion about how to get away from the idea that the only way to be a scientist is to be a full professor.”

Literature professor Anette Simonis, a spokesperson for a German organization of mid-career academics, responds to a controversial Berlin law that obliges universities to offer postdoctoral students a pathway to a permanent position. (Science | 5 min read)

Today, Leif Penguinson is dipping tired flippers in the Potomac River in Great Falls National Park, Virginia. Can you find the penguin?

The answer will be in Monday’s e-mail, all thanks to Briefing photo editor and penguin wrangler Tom Houghton.

This newsletter is always evolving — tell us what you think! Please send your feedback to briefing@nature.com.

With contributions by Smriti Mallapaty and John Pickrel