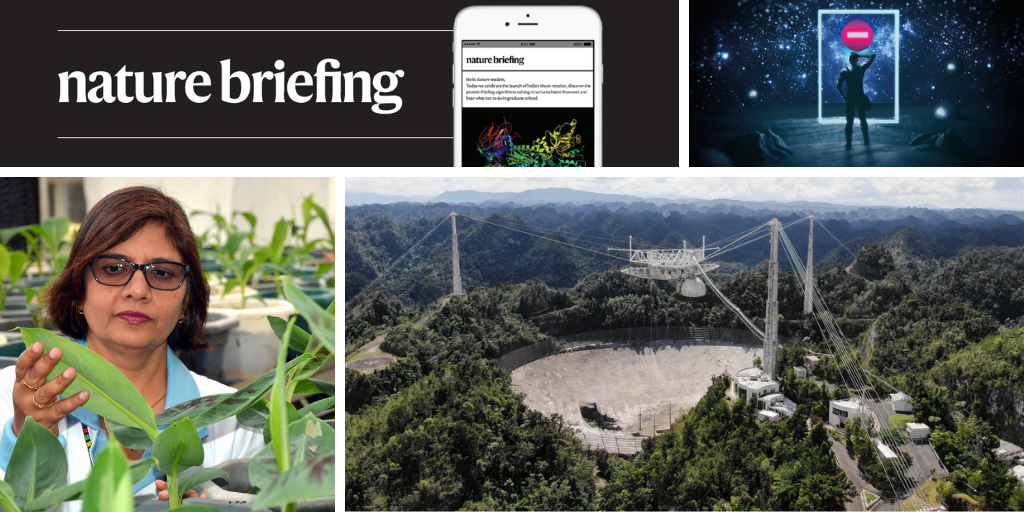 Scientists are reeling from the news that one of astronomy’s most renowned telescopes — the 305-metre-wide radio telescope at Arecibo, Puerto Rico — is permanently closing. Engineers cannot find a safe way to repair it after two cables supporting the structure suddenly and catastrophically broke, one in August and one in early November. “Even attempts at stabilization or at testing the cables could result in accelerating the catastrophic failure,” said Ralph Gaume at the US National Science Foundation, which owns the observatory. Limited science will continue at some smaller facilities at the Arecibo site.

Scientists are sharing memories and grief on social media using the hashtag #WhatAreciboMeansToMe. The loss is acutely felt in Puerto Rico, where the observatory is a cradle of science education and career development.

How COVID hinders the senses

COVID-19 affects the sense of smell and taste of about four out of five people with the disease, but scientists have struggled to explain why this happens. Now, a team in France has shown in hamsters that SARS-CoV-2 damages sustentacular cells in the nose that support the olfactory system, including the fingerlike cilia on the neurons that help to detect smells. “If you physically disrupt those cilia, you lose the ability to smell,” says neuroscientist Sandeep Robert Datta. Scientists are less certain of why people with COVID-19 often lose their sense of taste, or their chemical sensing, such as the ability to detect a chilli’s heat.

The use of facial recognition to pick people out of a crowd is on the rise. But this kind of ‘one to many’ match is notoriously inaccurate (unlike the ‘one to one’ verification that unlocks your phone, for example). Critics say the technology is also riddled with bias and can be used in discriminatory ways. Other aspects of facial analysis, such as deducing someone’s personality on the basis of their facial expressions, are even more controversial. “At this point in history, we need to be a lot more sceptical of claims that you need ever-more-precise forms of public surveillance,” says Kate Crawford, a computer scientist and co-director of the AI Now Institute.

Facial-recognition research is facing an ethical reckoning. As Nature reports in a series of Features this week, many in the field are worried about how the technology is being used. A special episode of the Nature Podcast explores what can go wrong in a world where your face is routinely photographed, shared, matched and mismatched — whether you like it or not.

Conventional science-communication tips — such as “tell a story” — might work when the aim is to change people’s beliefs or behaviours. But to maintain trust, it’s better for experts to inform and not persuade, argue an interdisciplinary group from the Winton Centre for Risk and Evidence Communication at the University of Cambridge, UK. Their approach, called evidence communication, recommends avoiding unwarranted certainty, neat narratives and partisan presentation.

The aim is to ‘inform but not persuade’, and — as the philosopher of trust Onora O’Neill says — “to be accessible, comprehensible, usable and assessable”, write researchers from the Winton Centre for Risk and Evidence Communication.

• Address all the questions and concerns of the target audience.

• Present potential benefits and possible harms in the same way so that they can be compared fairly.

• Avoid the biases inherent in any presentation format (for example, use both ‘positive’ and ‘negative’ framing together).

• Use numbers alone, or both words and numbers.

• Demonstrate ‘unapologetic uncertainty’: be open about a range of possible outcomes.

• When you don’t know, say so; say what you are going to do to find out, and by when.

• Highlight the quality and relevance of the underlying evidence (for example, describe the data set).

• Use a carefully designed layout in a clear order, and include sources.

Among the exhibits in the British Museum is a 4,000-year-old clay tablet containing the oldest known customer complaint, notes author M. V. Melcer on her inspiration for the latest short story for Nature’s Futures series. Tourist trap explores what complaints the customers of the future might have — and why we should always read the instructions on interdimensional portals.

Andrew Robinson’s pick of the top five science books to read this week includes the science of sliminess, the secrets of bones, and mathematicians who took to the air.

Leena Tripathi uses CRISPR gene-editing technology to protect bananas and other staple crops across Africa against killer pathogens. “Kenya imposed a partial lockdown on 7 April, but I was allowed to continue some crucial laboratory work, and our research is not affected,” says Tripathi. “These plants are like our ‘babies’ in the lab — I can’t leave them.” (Nature | 3 min read)