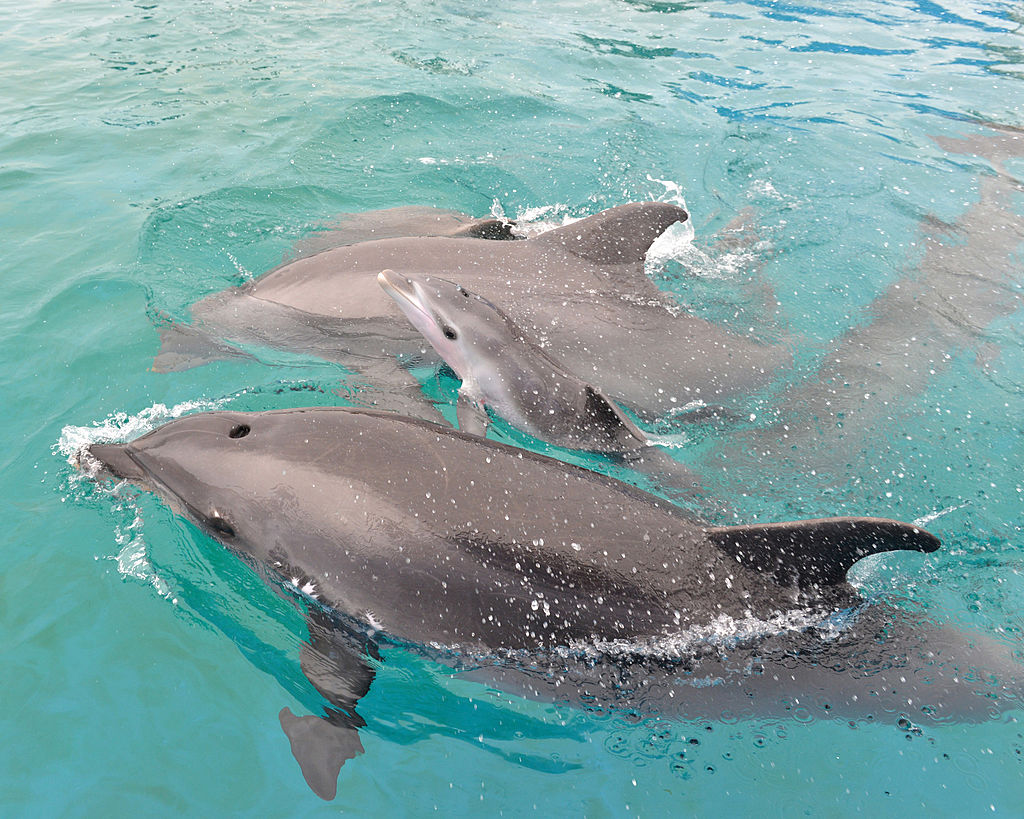 A bottlenose dolphin identifies itself with its signature whistle. This unique call is used to communicate their, identity, location and even emotional state. A new study published in journal ScienceDirect suggests that there could be more to this signature whistles.

Communication among dolphins also vary with frequency and volume. According to scientists, they alter their volume throughout their signature whistles as a way to communicate additional information besides just their identity. 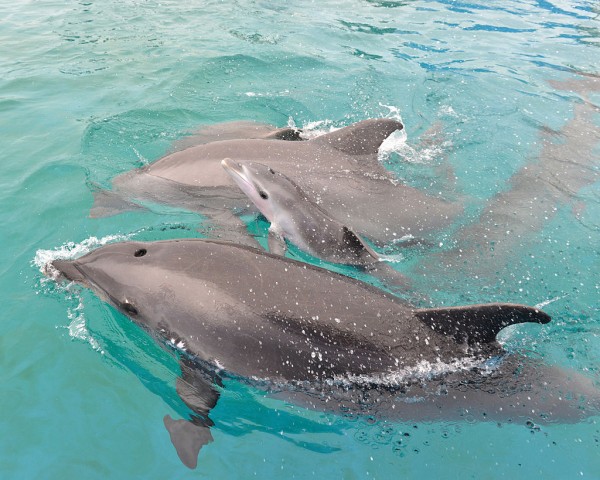 (Photo : Photo by Mike Aguilera/SeaWorld San Diego via Getty Images)
SAN DIEGO, CA – NOBEMBER 12: In this handout photo provided by SeaWorld San Diego, a bottlenose dolphin was born at SeaWorld San Diego at 12:33 p.m. in a behind-the-scenes pool November 12, 2013 in San Diego, California. Shown in the picture are the mother (Kolohe, below), the newborn dolphin calf, and another female dolphin above the baby (Daphne, a 14-year-old female). Kolohe (pronounced ka-LO-hay), who is a Pacific bottlenose dolphin, has given birth to one other calf. SeaWorld animal care specialists and veterinarians report that the mother and calf are doing well, swimming together and bonding. As with any birth at SeaWorld, they will be monitored round the clock.

“This seems a lot like the kind of non-word communication that we humans use, based on inflections, like putting emphasis in a certain area or how we sort of fade out and fade in so we know when it’s each other’s turn to talk,” says Brittany Jones at the National Marine Mammal Foundation in San Diego, California.

As far as dolphin communication is concerned, the study pointed out that dolphins might be using frequency as an identity stamp and amplitude to convey additional information to each other, Jones added.

Unlike frequency, the results suggested that the amplitude of signature whistles in dolphins are largely non-stereotyped, “characterized by large variability across multiple whistle emissions,” authors of the study wrote.

This finding is particularly interesting due to the fact that after whistle contours in common bottlenose dolphins (Tursiops truncatus) had been widely studied for nearly 60 years, it was just today that capturing amplitude in underwater animals constantly moving around in different directions had been possible.

Through improved technology in underwater microphones, such as hydrophones, as well as along with more advanced sound analysis equipment and a more controlled recording environment, this limitation has been overcome and studying dolphins’ whistle amplitudes had been done with greater accuracy.

What volume patterns from whistle to whistle could mean for dolphins

The team discovered that the dolphins’ volume patterns changed considerably from whistle to whistle after recording 50 repetitions of the signature whistles of eight adult dolphins living in natural seawater enclosures in the San Diego Bay as part of the US Navy Marine Mammal Program.

It can be observed that dolphins tend to increase their volume when they were whistling at a lower frequency. However, the team found no clear amplitude patterns across dolphins or within their whistles, as each whistle consisted of louder and softer calls.

Surprised by how variable the amplitude patterns were, Jones initially wondered if they might just be random. “But then I thought, well, if the signature is so constant all the time, it makes it hard to communicate different things, sort of like saying the same word over and over,” she says. “So maybe this is a new avenue that lets [dolphins] code additional information.”

Dolphins are known to be highly social creatures that have more to say to each other, maybe far more than we can imagine.

“Oh gosh, what wouldn’t they want to be telling each other?” says Jones. “Location, arousal level, reproductive status, whether there’s a predator around… The sky is the limit in terms of what dolphins might communicate about.”

Also read: Could Octopuses Have Come from Outer Space? Papers of Science Could Prove Why