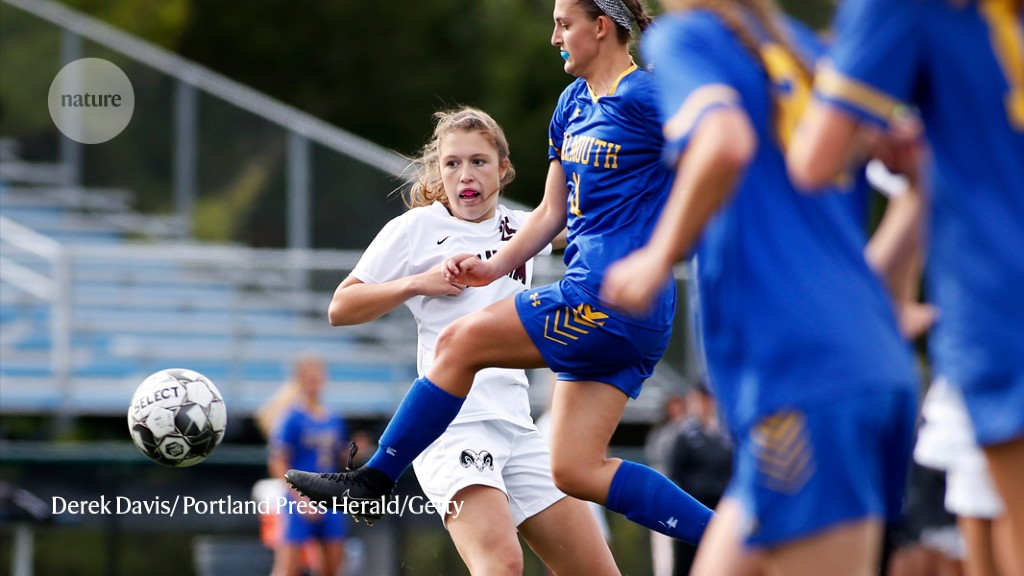 Female soccer players are twice as likely to suffer concussion than their male counterparts, a study of more than 80,000 teenage players across US high schools has found.

Researchers analysed survey data from around 43,000 male and 39,000 female players from schools in Michigan over three academic years. A striking difference emerged between the sexes in their likelihood of having a sports-related head injury, with the girls’ chance of concussion 1.88 times higher than the boys’, according to the findings published on 27 April in JAMA Network Open1.

Scientists already suspected that head injuries were more common, and required longer recovery times, in female athletes. But concrete data were lacking, says neuropathologist Willie Stewart from the University of Glasgow, UK,, who led the study. “We’re doing so little research in female athletes,” he says. Such a large volume of data on sports injuries, collected by the Michigan High School Athletic Association, offered an opportunity to investigate whether female athletes really are at higher risk of concussion.

“There were indeed differences between male and female athletes,” says Stewart. How the high-school players sustained their injuries also differed significantly between male and female adolescents: the boys’ most common way of becoming concussed was through bashing into another player, with almost half of all concussions reported happening in this way. Girls were most likely to be concussed after colliding with another object, such as the ball or one of the goalposts. Boys were also more likely to be removed from play immediately after a suspected head injury than were girls.

The different mechanism for head injuries in girls is an important finding, Stewart says. “It might be one reason girls with concussion were not being picked up on the field so regularly,” he adds. Concussion-management systems currently in use — from how potential head injuries are spotted during a match, to how athletes are treated and how quickly they return to play — are almost exclusively dictated by research on male athletes, says Stewart. “Rather than the current, male-informed, one-size-fits-all approach to concussion management, there might need to be consideration of sex-specific approaches,” he says. This could include restrictions on heading footballs, or having more medically trained personnel present during female matches.

Liz Williams, who researches biomechanics and head injuries at Swansea University, UK, conducted a large international study into female rugby players and their experiences of injury in 2020. Stewart’s findings don’t surprise her. “We’re all finding the same thing, females are more predisposed to brain injury than males,” she says, “and the incidence is likely higher, in my opinion, than what is being reported.”

REAL TIME – Corona Virus Statistical Data (Worldwide)
What Does Big Data Have to Do With Wildlife Conservation?
Concern over use of the term Z-DNA
BMW starts European road tests of hydrogen fuel cell cars
KeepTruckin raises $190 million to invest in AI products, double R&D team to 700
US Pledges to Protect Territory of Endangered Humback Whales in Pacific Ocean