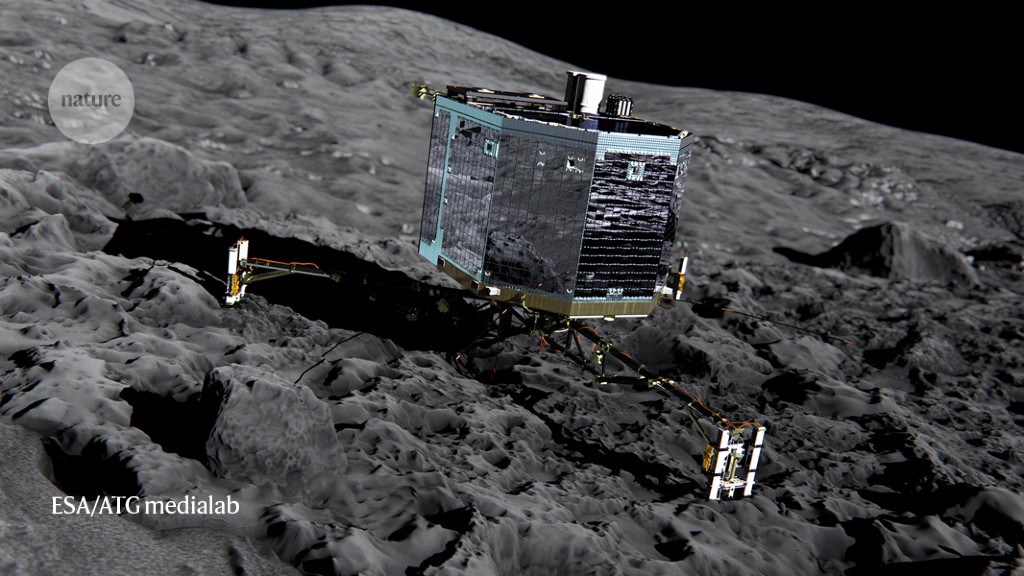 The chaotic crash-landing of a robotic spacecraft called Philae has yielded serendipitous insights into the softness of comets.

In 2014, the European Space Agency’s pioneering lander touched down on comet 67P/Churyumov-Gerasimenko, after a ten-year journey aboard its mothership, Rosetta. But rather than fix itself to the surface, Philae bounced twice and ended up on its side under a shady overhang, cutting its mission short.

After a meticulous search, an ESA team has now discovered the previously unknown site of Philae’s second touchdown — and with it an imprint that the craft left in comet ice that is billions of years old (see ‘Boulder bounce’).

The imprint has allowed the researchers to measure the strength of ice beneath the comet’s surface — and they discovered that it is exceptionally soft. “It’s softer than the lightest snow, the froth on your cappuccino or even the bubbles in your bubble bath,” says Laurence O’Rourke, an ESA scientist at the European Space Astronomy Centre in Madrid, who led a search to locate the wayward lander, which was found in 2016.

This is “a wonderful piece of detective work”, says Jessica Sunshine, who studies comets at the University of Maryland in College Park, and was not involved in the work. The study is important, she says, because some previous data from Philae had suggested that 67P’s surface could be very hard — which might hinder future attempts to retrieve samples of comet ice. The latest result provides evidence that the ice is weak and compressible. “I’m very excited to have proof that we can get back out there and get a sample of 4.5-billion-year-old ice,” says Sunshine. The findings were published1 in Nature on 28 October.

ESA scientists knew that Philae bounced on landing and clipped a cliff edge. It then tumbled towards a mystery location, before coming to rest. The landing would not have been violent: in the comet’s low gravity, the 100-kilogram probe would have weighed one gram and taken 10 seconds to drift one metre, says O’Rourke.

To hunt for the second touchdown site, O’Rourke’s team analysed images around the lander taken by Rosetta. After spotting tell-tale signs of bright, artificially cut ice around 30 metres away from the probe’s resting place, the researchers used images taken from all angles to build a 3D model of the area, which they nicknamed skull-top ridge because of the boulders’ shape. The team compared the landscape before and after Philae’s passage and analysed internal data from the probe to reconstruct the craft’s likely trajectory through the ridge.

They think that Philae touched the surface at four points over two minutes: it slid down a slope, cartwheeled through a crevice and hit a boulder, then bounced on its head before departing for its resting place. The third impact was the most revealing. The top of the craft made a 25-centimetre-deep imprint in boulder ice. By comparing this depth with the time taken to make the imprint — which it gleaned from how long Philae’s magnetic sensor was displaced — the researchers calculated the material’s compressive strength to be just 12 pascals. That’s softer than freshly fallen snow, they say.

Although Philae’s tilted final position meant the drill on its underside never reached the comet’s surface, the instrument’s housing, a tower on the craft’s surface, ended up penetrating the ice far enough to make some similar measurements. “We’ve been able to probe the interior of the comet and understand what it’s made of, all because of Philae’s movements, rather than a dedicated instrument on board,” says O’Rourke. “This is the icing on the cake.”