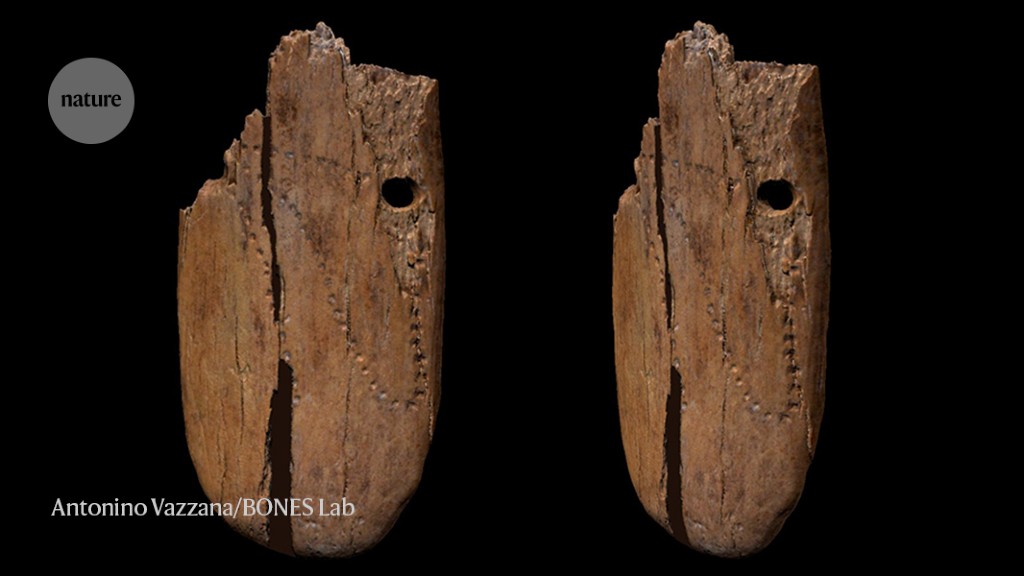 A 41,500-year-old pendant carved from a piece of a woolly-mammoth tusk could be the oldest known example of decorated jewellery in Eurasia made by humans, according to archaeologists.

The oval-shaped pendant has two drilled holes and is decorated with a least 50 smaller puncture marks that create a looping curve. It was found in the Stajnia Cave, a natural rock shelter in southern Poland. The results of radiocarbon dating, published in Scientific Reports (S. Talamo et al. Sci. Rep. 11, 22078; 2021), suggest that it is 2,000 years older than similarly decorated artefacts from other sites.

But the claim that the pendant is the oldest ornate jewellery in Eurasia could prove controversial. Martin Porr, who studies rock-art archaeology at the University of Western Australia in Perth, thinks that the pendant is “highly significant and intriguing”, but says that the researchers restricted their comparisons to other artefacts that have been decorated with puncture marks, and did not include items of a similar age that could also have been used as jewellery.

“The pendant of Stajnia is the only decorated artefact of its kind [that is] directly radiocarbon dated, and the comparison with the other punctuated ornaments shows it is the oldest,” says Sahra Talamo, a chemist at the University of Bologna in Italy, who led the study.

A sweeping study of 8 million calls to helplines in 19 countries and regions found that call volumes jumped during the first wave of coronavirus infections. Loneliness and concerns about the pandemic drove most of the callers, rather than imminent threats such as suicidal thoughts or abuse.

The analysis (M. Brülhart et al. Nature https://doi.org/g6fs; 2021) is one of the largest to address mental-health challenges during the pandemic. The authors collected helpline data from regions including the United States, China, Lebanon and Europe. Analysis showed that six weeks after the initial wave of coronavirus infections began, the number of calls was 35% higher than before the pandemic.

Despite fears that the pandemic would cause a surge in mental-health crises including suicides and addiction, and in intimate-partner abuse, the authors did not find signs of this in their data. That does not invalidate the suffering of some individuals, or anecdotal or regional studies that might have found different results, says co-author Marius Brülhart, an economist at the University of Lausanne in Switzerland. It just means that the trend did not emerge from his team’s large-scale helpline data.

What the Moderna-NIH COVID vaccine patent fight means for research

Victories against AIDS have lessons for COVID-19

Europe’s COVID death toll could rise by hundreds of thousands

Helpline data used to monitor population distress in a pandemic