A new marine reptile has been found by international researchers from Canada, Colombia, and Germany. One of the few remaining ichthyosaurs-ancient animals that appear remarkably like live swordfish-the specimen is a superbly preserved meter-long skull.

Hans Larsson, Director of the Redpath Museum at McGill University, states, “This species had a specialized dentition that allowed it to consume enormous prey.” “Whereas previous ichthyosaurs had small, evenly sized teeth for feeding on small food, this new species changed the sizes and spacing of its teeth to construct an arsenal of teeth for disposing of huge prey, such as giant fish and other marine reptiles.”

“To honor the ancient Muisca culture that existed there for millennia, we decided to name it Kyhytysuka, which translates to ‘the one who cuts with something sharp’ in an indigenous language from the region in central Colombia where the fossil was found,” says Dirley Cortés, a graduate student under the supervision of Hans Larsson and Carlos Jaramillo of the Smithsonian Tropical Research Institute.

Comparing to an Ichthyosaur 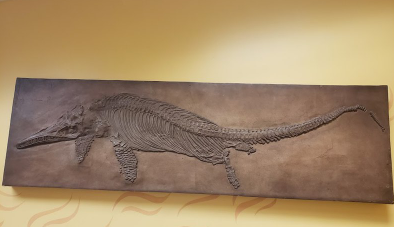 The researchers claim that this new species clarifies the overall picture of ichthyosaur evolution. “We were able to establish a new type of ichthyosaur by comparing this species to other Jurassic and Cretaceous ichthyosaurs,” explains Erin Maxwell of the State Natural History Museum Stuttgart (a graduate student of Hans Larsson’s group at McGill). “This upends the ichthyosaur evolutionary tree and allows us to explore fresh theories about how they originated.”

According to the researchers, this species hails from a critical transitional era during the Early Cretaceous period. The Earth was emerging from a relatively chilly phase, sea levels were increasing, and the supercontinent Pangaea was dividing into northern and southern landmasses during this time. At the end of the Jurassic, a worldwide extinction catastrophe also altered marine and terrestrial ecosystems. “Many traditional Jurassic marine ecosystems of deep-water feeding ichthyosaurs, short-necked plesiosaurs, and marine-adapted crocodiles were superseded by new lineages of long-necked plesiosaurs, sea turtles, enormous marine lizards known as mosasaurs, and now this monster ichthyosaur,” Dirley Cortés adds.