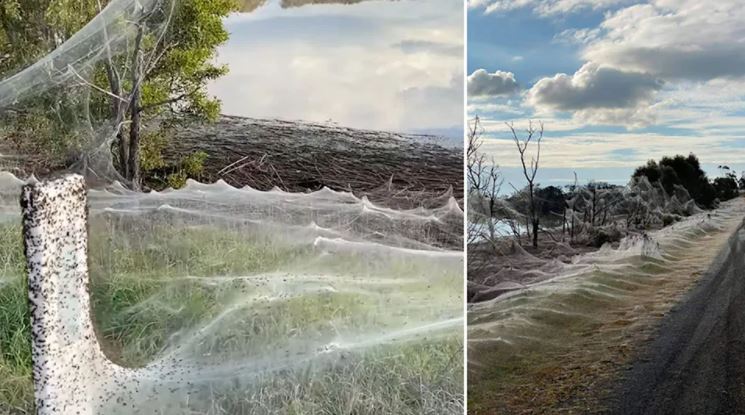 Flooded roads and paddocks disturb local spiders which search for higher ground on trees, road signs, and any tall grass they can locate.

The Alien-like Sheets of Spider Webs

Eastern Victoria residents have been taken by surprise after waking up to extensive, alien-like sheets of spider webs laying across roadsides and paddocks. The East Gippsland town of Traralgon was among the hardest-hit regions by recent flooding and unfavorable weather.

While its neighbour Sale steered clear of the brunt of the damage, roads that are flooded and paddocks disturbed the local spider populations, which are now in search of higher ground on trees, road signs, and any tall grass they can locate. 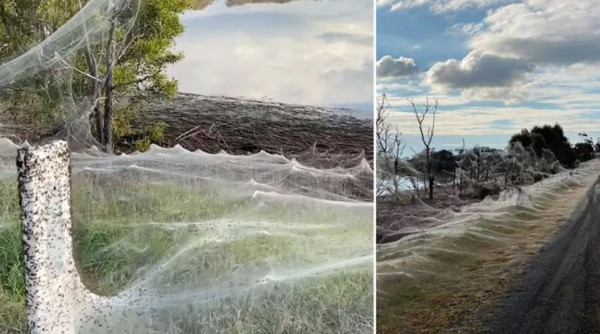 Jena Beatson, who spotted the spiders on her first trip into Sale from Longford after the highways were cut off by flood waters said: “It’s just unbelievable, when they blow in the winds they resemble waves.” He also said it looks creepy the way it blankets all the signs and everything. And one can’t really see it in the pictures but there are spiders everywhere. It’s like thousands and thousands of spiders.

Actually, it is millions, according to a senior curator of entomology at the Melbourne Museum, Dr Ken Walker. He said it’s a semi-regular happening in Victoria during wintertime when there’s intense rain.

Spiders can make a wide range of distinct silks and one of the silks they use for this act – ballooning – it’s a very, very thin little silk that they make use of… to fly away with the breeze. They could fly about 100km.

He said what happened is there’s been a great flooding event pretty quickly … so they’re making use of the ballooning not to run away for hundreds of kilometres but to nearly throw up a lasso on top of the vegetation. It gets trap on to the tops of the vegetation since it’s lighter than air, and then they climb up quickly. 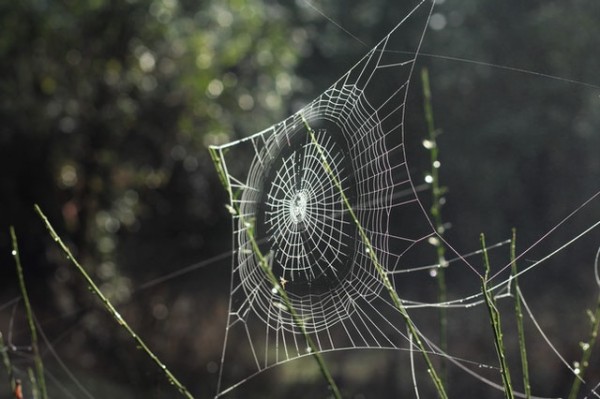 When a large number of spiders all do this at the same time, they end up hooking on to each other and can cover the countryside.This phenomenon, at times referred to as the gossamer effect, is brought about by “vagrant hunter” spider species, which inhabit the ground and do not make a web.

They also do not build webs after ballooning away from a flood. In fact, Walker said, every spider only threw up one thread, meaning every tiny line of silk represented a distinct animal. “I would say millions of spiders [in the pictures online],” he said.

East Gippsland is also going through a degree of mouse plague activity, which for some months has wrecked regional New South Wales and has now crept across the southern border.