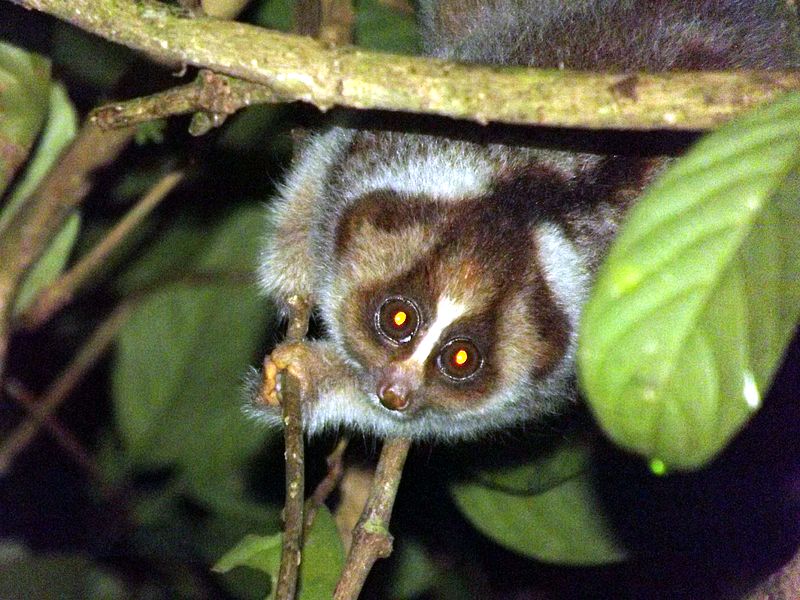 These fascinating nocturnal primates have gained a lot of fans worldwide due to its cuteness. Slow loris has nine species: The Bengal, Bornean, Greater, Hill’s, Javan. Kayan, Philippine, Pygmy and Sody’s. These animals feature forward-facing eyes and human-like hand with an opposable thumb. They are thought to be slow-movers, but they race-walk at night and could travel up to 8 kilometers every night.

Pregnancies are up to six months, and a baby weighs of a handful of paperclips. Their second finger is reduced for gripping, and they possess one of the longest tongues of all the primate. The extended tongue is useful for drinking nectar.

Slow lories are now endangered as a result of the loss of habitat and hunting for the illegal pet trade, and traditional medicine use. The slow loris is believed to cure 100 diseases.

Slow loris has potent venom than can kill, and it has no known cure. The glands underneath their armpits release noxious oil. When slow lorises lick their glands, the saliva mixes with the noxious oil and concoct the venom. The venom then filled their grooved canines. They can deliver a nasty bite that is strong enough to pierce through the bone. The toxin causes the bitten areas to rot. Some lories have been spotted with half their faces melted off.

Primates developing a venom has long intrigued scientists. The initially believed that the venom was used to defend themselves from predators or ward off parasites.

To discover the use of the slow lorises’ venom in the wild, the study team spent eight years in Java Indonesia to study the critically endangered Javan slow loris. The team spent 7,000 hours studying the lorises’ behavior and health. Eighty-two lories were equipped with radio collars to track their movements. Every month, the team captured individuals to check on the lorises’ health.

Slow Lorises Fight Each Other

The study team’s health checks revealed that 20 per cent of all the lorises had fresh bite caused by other lorises. A third of the females and 57 per cent of the males showed signs of an edge, while younger lorises had more bites than older lorises.

The findings made the team conclude that slow lorises are viciously territorial, and they use venom as their weapon of choice. Males become aggressive when they defend their mates, while females are protective of their young and its food resources.

There are only five other mammals that use venom against their species: the vampire bats, two shrew species, platypuses, soledons, and critters in Central America.

Slow-loris may be wide-eyed adorable primates, but one must think twice about snuggling them as their flesh venom can rot flesh of not only handlers but their kin as well.

READ NEXT: Study Finds the First Evidence of Venom Glands Similar to Snakes in Caecilian Amphibians

Check out for more news and information on Insects on Nature World News.

REAL TIME – Corona Virus Statistical Data (Worldwide)
China’s Moon Probe to Seek First Lunar Rocks Retrieval for a Nation Since 1970s
SpaceX to Press Ahead With Starlink Tests, Delays Commercial Service
A Sweet Thanksgiving for Our Galaxy
Book-burning through the ages, the Arctic laid bare, and capitalism under scrutiny: Books in brief
Siemens and Deutsche Bahn plan trial of hydrogen-powered train in Germany