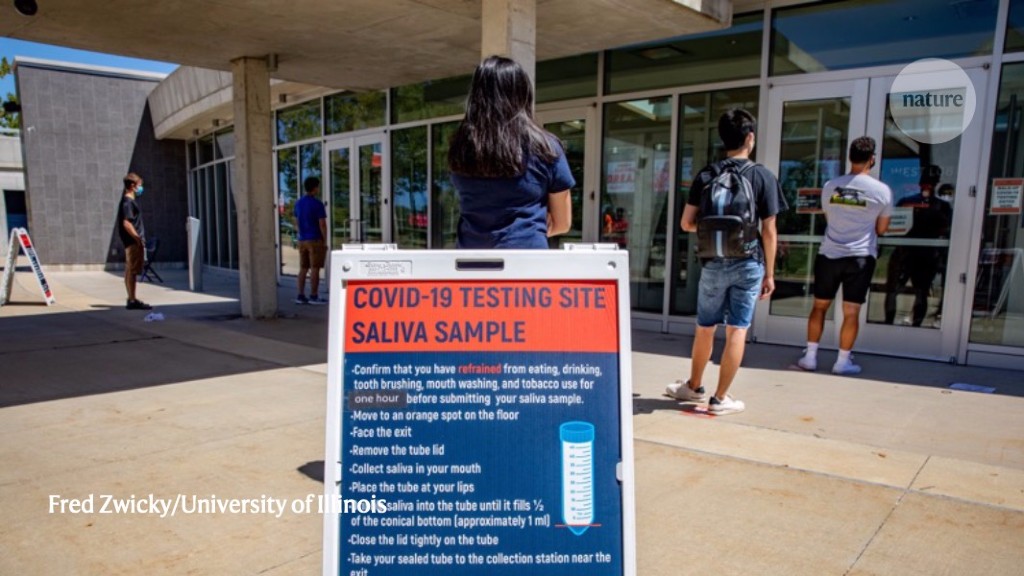 As universities around the globe struggle with how to keep their doors open amid the COVID-19 pandemic, some have developed their own rapid coronavirus diagnostics to test students multiple times per week. The University of Illinois at Urbana–Champaign (UIUC) has a mass testing programme that has been touted as a model system.

More than 25 institutions have contacted UIUC because of interest in its testing platform, says a university spokesperson. But the institute has seen a spike in infections in recent weeks — on 31 August, it reported 230 new COVID-19 infections in one day, a 291% increase over the daily total a week earlier. 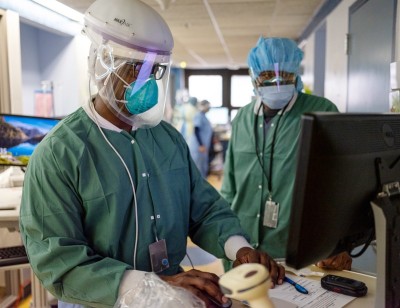 Martin Burke, a chemist at UIUC who helped to develop the university’s RNA-based saliva test1, spoke to Nature about the challenges and lessons from the past few weeks.

How did you get involved in developing this test?

At the end of April, UIUC provost Andreas Cangellaris called me and asked if I would lead a team to build up and deploy scalable testing as part of our campus’s effort to reopen as safely as possible. We decided to take a comprehensive approach: we got a lot of data scientists to help us figure out how to model the epidemic on campus. We realized that we would need to test everybody on campus twice a week. Over the course of about six weeks, we discovered that we could use saliva samples and cut out almost all the bottlenecks associated with standard COVID-19 tests. We’re now doing more than 10,000 — sometimes 15,000 — tests per day. That’s about 2% of the testing done in the entire United States.

That’s a huge undertaking. How is testing coordinated?

It’s been an extraordinary team effort. Timothy Fan, who’s a veterinarian at UIUC, helped convert the Veterinary Diagnostic Laboratory into a human COVID-testing lab. A team of about 25 university technicians works in shifts to run the tests. Our chancellor was able to get the team that normally does logistics for big events like football games to help: 20 testing tents popped up all over campus, and we hired about 200 people from the community to help run them.

What’s innovative about the test compared with standard RNA-based tests?

Three things. We use saliva instead of a nasal swab. We skip RNA isolation, which saves a very expensive and slow step. And as soon as the sample tube comes into the lab, it gets heated in a water bath at 95 °C for 30 minutes, which inactivates the virus and protects the workers, but also breaks the virus open and exposes its RNA — so we kill two birds with one stone.

Walk us through what happens when people take the test on campus.

You swipe your ID card, and walk into a big open-air tent over to a square that’s 6 feet [2 metres] apart from all the other squares, and you just dribble into a tube. You put the tube in a rack, and once the rack is filled, [workers] seal it up and drive it on a golf cart down to the lab, where it gets straight into the water bath. The test itself takes 90 minutes; the results come back in less than 24 hours. The data go straight to an app on your phone. To get into any building, you have to be able to scan your data to show that you are compliant with testing twice a week. If you don’t get tested, you lose your academic standing. 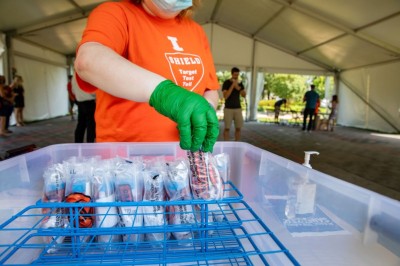 What if someone tests positive?

As soon as we see there’s a positive result, that information goes straight to [local public-health authorities]. A team of about 60 people are trained to call and tell the person that they have tested positive and they need to isolate. They also ask them, who did they spend time with for more than 15 minutes within 6 feet of distance? Those individuals get called and they are informed that they are a contact for someone who tested positive, and they need to quarantine.

On 31 August, UIUC reported a spike in campus infections. What happened?

When we put the whole programme in place, we did a bunch of modelling to try to understand how student socialization was going to integrate with the fast, recurrent testing. We modelled that they were going to go to parties and that they probably weren’t going to wear masks, and it would lead to some level of transmission. What we didn’t model for is that people would choose to go to a party if they knew that they were positive. The overwhelming majority of our students have done a great job, but unfortunately, a small number of students chose to make very bad decisions that led to a rise in cases.

Does this call into question the idea that mass testing can keep campuses safe?

The answer is definitely no. We caught this early, we made changes, and now we’re watching our numbers fall. [On 8 September, UIUC reported a total of 81 new COVID-19 infections in one day, a 65% decrease since the spike.] 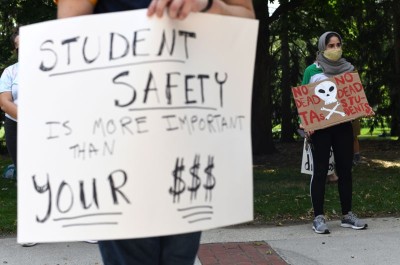 What protocol changes did UIUC make?

People who made those bad choices have been suspended, and there have been restrictions on all the undergraduates. They’re still going to classes, but they’re not allowed to socialize in any kind of group situation for two weeks. We’ve started testing more frequently [in the fraternity houses and dormitories] where there were problems. Because some of the students were intentionally avoiding phone calls from public-health authorities, we built our own internal team, whose goal is to get everyone [who tests positive] safely isolated within 30 minutes.

What lessons have you learnt from the past few weeks?

It’s not just a matter of getting the test done fast; it’s a matter of acting on the results as fast as possible. We didn’t appreciate how powerful it could be if we were the ones to reach out immediately, as opposed to waiting for the standard process through public-health authorities.