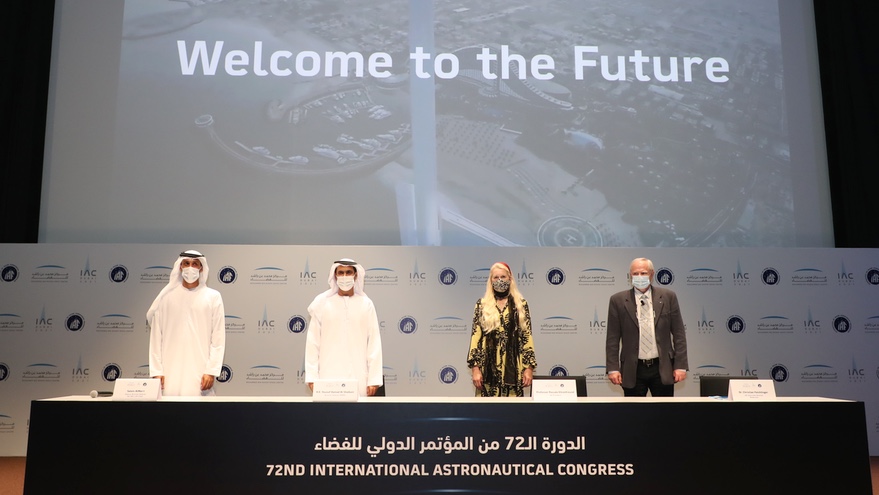 WASHINGTON — The International Astronautical Federation (IAF) is moving ahead with plans to hold an in-person conference, one of the largest in the space industry, this October in Dubai.

At a May 18 press conference, officials with the IAF and the Mohammed Bin Rashid Space Center confirmed they will hold the 72nd International Astronautical Congress (IAC) Oct. 25–29 in Dubai. The IAC is traditionally one of the largest conferences of the year in the space field, attracting people ranging from executives and heads of space agencies to students and young professionals.

Dubai was set to host the IAC in October 2020, but the coronavirus pandemic forced organizers to move to an online-only conference, like most other events that were not canceled entirely. Now both the IAF and local organizers believe that with the pandemic ebbing in much, but not all, of the world, they can move ahead with a more traditional in-person conference.

“We used the time to learn and revisit all aspects of the event to ensure that the Congress will run smoothly and, most importantly, safely,” Salem AlMarri, deputy director general of the Mohammed Bin Rashid Space Center and local organizing chair of the IAC, said at the briefing.

He said organizers have been working closely with government officials on conference planning, “setting up all required protocols.” He didn’t elaborate on those protocols, but did note that 70% of those living in the United Arab Emirates have been vaccinated for COVID-19.

The IAF is anticipating a smaller audience than some previous conferences. Pascale Ehrenfreund, president of the IAF, said at the briefing that her organization is expecting between 3,000 and 4,000 participants from about 70 countries. By contrast, more than 6,300 people attended the 2019 IAC, held in Washington.

Despite the lower attendance projections, conference organizers are committed to an in-person event. “We do not foresee, at this point in time, any remote participation at this conference,” said Christian Feichtinger, executive director of the IAF. “The Congress itself will be a congress that is really one of personal meetings, personal attendance.”

Organizers said the conference will otherwise be structured like those in past years, including the traditional heads-of-agencies plenary panel. They said they left open the possibility of having “celebrity” participants, noting that Blue Origin founder Jeff Bezos spoke at the 2019 IAC and Elon Musk, chief executive of SpaceX, at IACs in 2016 and 2017. But the IAF did not commit to any specific participants.

The decision to proceed with an in-person IAC is part of a gradual trend by the space industry to resume in-person events that were halted in March 2020 by the pandemic. The Space Foundation said April 28 it will hold its annual flagship event, the Space Symposium, in Colorado Springs Aug. 23–26. The event will adopt a “hybrid” format, with about 6,000 people participating in person and others attending sessions remotely.

The organizers of the Satellite 2021 trade show are moving ahead with an in-person conference. The event was scheduled for late July at the Washington Convention Center, but rescheduled for Sept. 7–10 in suburban National Harbor, Maryland, after local officials said they planned to continue to use the convention center as a vaccination site.

The IAF said at the briefing that the delay of the Dubai IAC from 2020 to 2021 means the next two congresses will also be pushed back. Paris, which was to host the IAC in 2021, will instead host it in 2022, while the 2023 event will take place in Baku, Azerbaijan. Feichtinger said the IAF is considering bids for the 2024 conference from Australia, Brazil, Hungary, Italy and Spain.