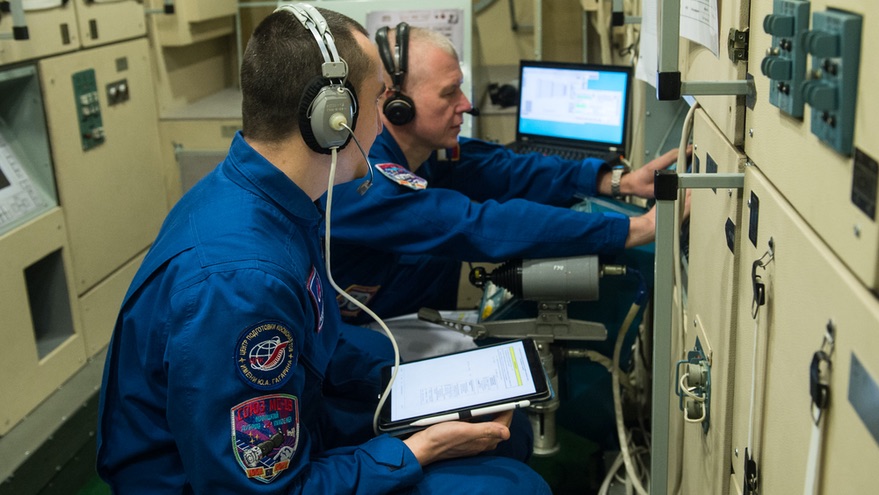 WASHINGTON — It is increasingly likely that a NASA astronaut will fly on a Russian Soyuz mission to the International Space Station in April as the agency finalizes an agreement with its Russian counterpart.

In a Feb. 25 statement, Roscosmos said that its director general Dmitry Rogozin, spoke that day with NASA Acting Administrator Steve Jurczyk. The conversation, Roscosmos stated, included congratulations from Rogozin on the landing last week of NASA’s Perseverance Mars rover and discussions of the upcoming launch of Russia’s Arktika-M satellite to monitor conditions in the Arctic.

The statement also mentioned “mutual content with the level of cooperation between Roscosmos and the US space agency including the International Space Station program” that appeared to include Soyuz flights. “The parties also touched upon the arrangement to maintain continuous presence of Russian and American crews at the ISS,” the readout said.

NASA announced Feb. 9 that it was working to obtain a seat on the next Soyuz mission to the ISS, Soyuz MS-18, scheduled for launch April 9. The agency said it would obtain the seat through the exchange of “in-kind services” rather than a direct purchase, an arrangement believed to involve a third party, commercial spaceflight company Axiom Space.

That announcement was tied to the publication of a “sources sought” procurement filing, a necessary step to identify any alternative arrangements before concluding the deal. The deadline for responding to the filing was Feb. 19.

NASA officials have said little publicly about its efforts to obtain the Soyuz seat, citing the ongoing procurement. “That’s an active procurement right now, and I’m just really not in a position where we can talk about it,” Kenny Todd, deputy manager of the ISS program at NASA, said during a Feb. 24 briefing about a pair of upcoming spacewalks at the station.

Todd declined to say even who NASA is considering to fly on that Soyuz seat, if it does obtain it. However, a Roscosmos press release Feb. 24 that discussed training by Russian cosmonauts for the upcoming mission appeared to confirm the identity of that astronaut.

In one image, cosmonauts Oleg Novitsky and Pyotr Dubrov were training in a simulator. Visible on their flight suits was the Soyuz MS-18 mission patch, which included their names along with “Vandei Hei,” an apparent reference to NASA astronaut Mark Vande Hei. He has been considered the most likely astronaut to fly the mission, given that he was the backup to Kate Rubins on the previous Soyuz mission to the station last October, alongside Novitsky and Dubrov. Vande Hei had also been seen in some photos in recent months training alongside Russian cosmonauts assigned to the prime and backup crews.

The Roscosmos statement did not mention Vande Hei, but also did not mention Sergey Korsakov, originally assigned to Soyuz MS-18. Rogozin told the Russian news agency TASS Feb. 24 that the upcoming Soyuz flight would have “an international crew,” but did not elaborate.

NASA officials have long talked about having “mixed crews” on both Soyuz and commercial crew missions to the ISS, with a NASA bartering seats on CST-100 Starliner and Crew Dragon spacecraft in exchange for seats on Soyuz spacecraft. Doing so would ensure at least one Russian and one American on the station at all times should one vehicle suffer problems that take it out of service for an extended period.

That exchange will ultimately be done through an agreement between NASA and Roscosmos, but NASA officials have said that would not be done in time for the April Soyuz mission. The process by which NASA, at nearly the last minute, is seeking to get a seat on the Soyuz launch has raised questions on Capitol Hill.

In a Feb. 23 letter to Jurczyk, Reps. Frank Lucas (R-Okla.) and Brian Babin (R-Texas), the ranking members of the full House Science Committee and its space subcommittee, respectively, asked for a briefing on NASA’s plans to obtain the Soyuz seat. “After spending billions of taxpayer dollars on developing capabilities to launch American astronauts on American rockets from American soil, it is important for Congress to understand NASA’s existing agreements and future plans for accessing the International Space Station,” they wrote.

NASA did not release its own readout of the call between Jurczyk and Rogozin, and the agency did not respond to a request for comment on the Russian statement.