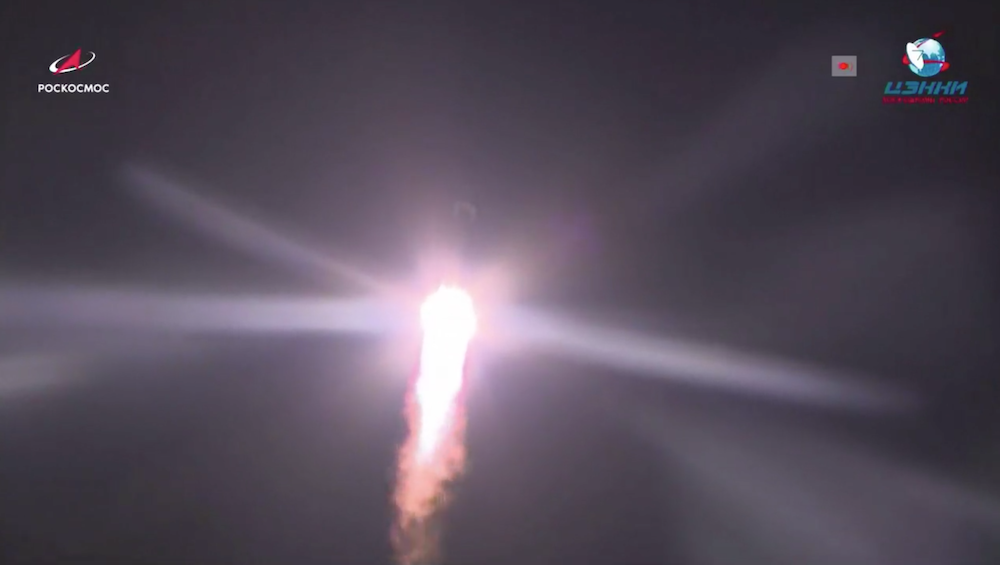 Arianespace’s Soyuz rocket lifted off from Russia’s Baikonur Cosmodrome in Kazakhstan at 1:06 p.m. Eastern. The satellites will separate at an altitude of 450 kilometers over the course of the 3-hour and 45-minute mission.

OneWeb will use each satellite’s onboard electric propulsion to raise their altitude to a final 1,200-kilometer orbit.

OneWeb expects to start regional service late this year with around 300 satellites, followed by global service in 2021 with 588 satellites. The company plans to launch 60 spare satellites to complete an initial constellation of 648 spacecraft, but hasn’t decided when those spares will launch.

Adrian Steckel, OneWeb’s chief executive, said in February that the company would take a month long break in April from launching to incorporate a redesigned spacecraft element for future satellites. Subsequent launches, initially planned at a monthly cadence, may be conducted at a more varied pace, he said.

OneWeb has contracts with Arianespace for 22 launches, of which three have occured, counting Saturday’s mission.

The companies have nine more missions planned for this year, though that schedule could be impacted by the coronavirus pandemic. Three of those missions — two Soyuz and the maiden Ariane 6 flight — are planned from the now-closed Guiana Space Center in South America. Arianespace said March 16 it was suspending launches from French Guiana following the French government’s call for limiting non-essential activities to curb the COVID-19 pandemic.

OneWeb is also reportedly considering bankruptcy, according to Bloomberg, because of a shortage of cash. OneWeb spokesperson Heidi Dillard told SpaceNews March 19 the company would not comment on any “rumors or speculation” when asked about the report.

OneWeb had raised $3.4 billion as of February, but has not stated how much the company needs to complete its constellation. In 2017, OneWeb founder Greg Wyler described the company as a $4 billion venture, but that was before the company started building spacecraft.

OneWeb’s satellites, built in Merritt Island, Florida, through a joint venture with Airbus Defence and Space, ended up costing $1 million each — twice as much as OneWeb had hoped.

Roger Rusch, president of the satellite consulting firm TelAstra, told SpaceNews last year that OneWeb likely needs $7.5 billion to complete its constellation. “The realistic number is probably far beyond where they are right now,” he said.