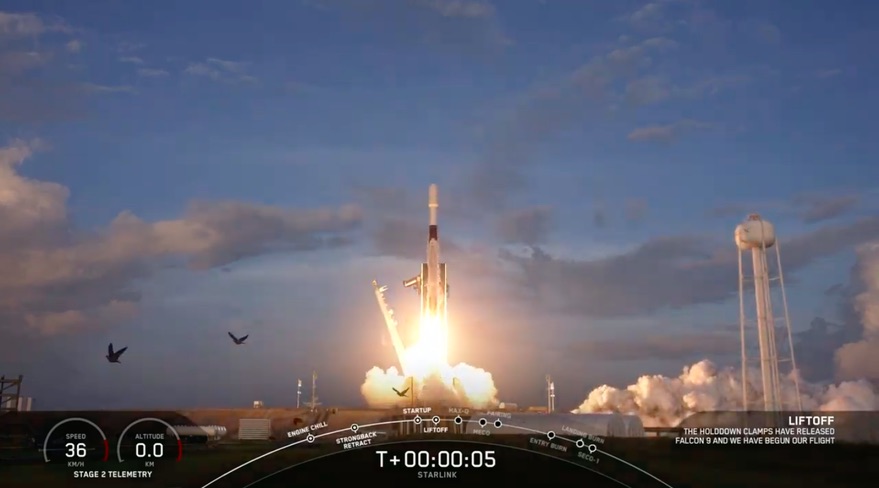 WASHINGTON — As SpaceX launches a new batch of Starlink satellites, the company is quietly deorbiting the original set of satellites less than 18 months after launch.

A Falcon 9 rocket lifted off from Launch Complex 39A at the Kennedy Space Center, Florida, at 7:29 a.m. Eastern Oct. 6. The launch suffered a series of delays because of poor weather and one abort at T-18 seconds Oct. 1 because of “out-of-family” data from a ground sensor.

The rocket’s payload of 60 Starlink satellites deployed from the upper stage 61 minutes after liftoff, nearly 20 minutes after a brief second burn of the upper stage to circularize its orbit, a maneuver SpaceX said is designed to speed up the process of moving the satellites into their final orbits. The Falcon 9 first stage, making its third flight, successfully landed on a droneship in the Atlantic Ocean.

With this launch, SpaceX has now launched 775 Starlink satellites, counting two prototypes launched in early 2018. However, 47 of those satellites have since reentered, either through deliberate maneuvers or natural decay, according to data maintained by astronomer and spaceflight analyst Jonathan McDowell.

The bulk of those deorbited satellites are from the initial group of 60 “v0.9” Starlink satellites launched in May 2019. Through Oct. 4, 39 of those satellites have deorbited, all but two of which since early August. The rate of deorbiting picked up in late August, with 32 satellites deorbiting since Aug. 29.

Critics of Starlink, though, have claimed the deorbiting satellites are evidence of reliability problems. In a Sept. 17 filing with the Federal Communications Commission, Viasat claimed that Starlink satellites had an in-orbit failure rate of 7%, far higher than SpaceX’s claims of a failure rate of less than 1%. “And an actual failure rate this high, manifesting after such a small fraction of a Starlink satellite’s design life has passed, optimistically implies a staggering 22% failure rate over the duration of the Starlink mission,” the company argued (emphasis in original.)

Viasat based that conclusion in part on McDowell’s data, prompting a rebuttal from him in a Sept. 21 FCC filing. He argued Viasat inflated the estimated failure rate of Starlink satellites by including the deorbited v0.9 satellites. “To include the deliberate retirement of the V0.9 satellites as failures, which Viasat appear to be doing, does not seem remotely justifiable to me,” he wrote.

Those satellites, Viasat said, were treated as “an integral part” of the Starlink system in a SpaceX report to the FCC in 2019. “Moreover, for the purpose of evaluating whether SpaceX is achieving the reliability level that it represented to the Commission it would achieve, Viasat believes that all failures—including failures of satellites that have been disposed of—are relevant.”

SpaceX, in its own response to Viasat’s filings submitted to the FCC Sept. 29, said that it had reported no failures in the last 233 Starlink satellites launched at the time of the filing.

“Viasat steadfastly refuses to allow facts to get in the way of the story it wishes were true,” the company wrote. “SpaceX continues to work to improve the performance and reliability of its vehicles.” That filing, though, did not discuss why the company was deorbiting its v0.9 Starlink satellites.