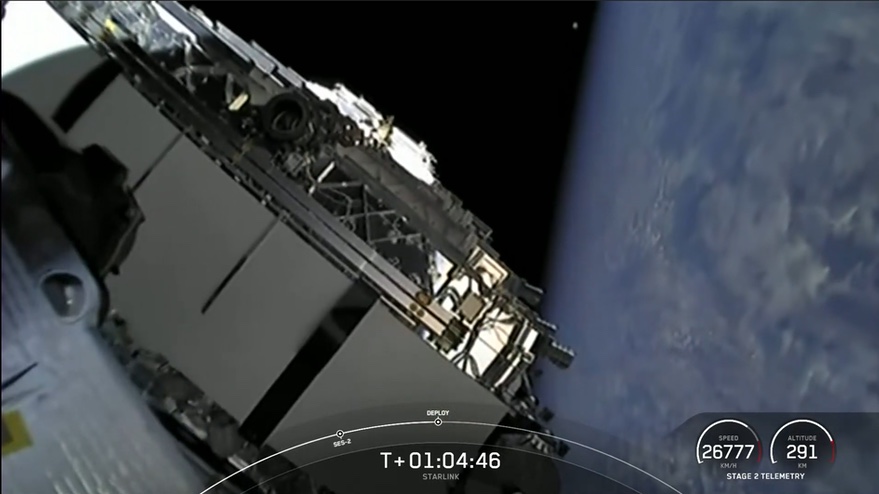 WASHINGTON — SpaceX launched another set of Starlink satellites April 28, its first since the FCC approved a modification that allows the company to operate more satellites in lower orbits.

The launch took place a day after the Federal Communications Commission approved SpaceX’s request to modify its Starlink constellation. The modification will move 2,814 satellites originally approved for launch in orbits of 1,100 to 1,300 kilometers to orbits of 540 to 570 kilometers, similar to the 550-kilometer orbits used by existing Starlink satellites.

SpaceX did not mention the FCC’s decision in its webcast. However, it did discuss how it chose lower orbits for spaceflight safety, ensuring that satellites will deorbit within several years of the end of their lives. It also mentioned its work with the 18th Space Control Squadron, sharing data on the orbits of Starlink satellites for collision avoidance activities, as well as a recent agreement with NASA to coordinate maneuvers between Starlink and NASA spacecraft in low Earth orbit.

“We are extremely proud of our efforts to not only provide internet access to the disconnected, but also ensure space remains a place where human spaceflight continues to grow,” Jessie Anderson, host of the webcast, said.

With this launch, SpaceX has now placed 1,505 Starlink satellites into orbit, of which 1,434 remain in orbit. The company was approaching its previous authorization of 1,584 satellites in 550-kilometer orbits when the FCC approved its license modification to allow more satellites in those lower orbits.

The Falcon 9’s first stage landed on a droneship in the Atlantic about eight and a half minutes after launch. The booster completed its seventh flight, which included launches of a GPS 3 satellite, the Turksat 5A communications satellite and five Starlink missions.

SpaceX has been using the Starlink launches to push the limits of reusability of the Falcon 9 first stage. “There doesn’t seem to be any obvious limit to the reusability of the vehicle,” Elon Musk, chief executive of SpaceX, said at an April 23 NASA press conference after the Crew-2 launch. “We do intend to fly the Falcon 9 booster until we some kind of a failure with the Starlink missions, have that be a life-leader.”

Musk’s comments came after the first launch of a reused Falcon 9 first stage on a crewed mission. The Crew-2 launch used the same first stage that flew the Crew-1 mission the previous November.

Musk said he and NASA have discussed what the optimal number of launches of a booster might be. “Do you want to be on a brand-new booster?” he asked. “You probably don’t want to be on the life leader for a crewed mission, but it’s probably good to have a flight or two under its belt.” He suggested a “couple of flights” might be best for a booster launching a crewed mission.

“It’s a hard problem for a rocket,” he said of reusability.

SpaceX also used the launch to honor Michael Collins, the Apollo 11 astronaut who died earlier that day at the age of 90. “Godspeed Apollo 11’s Michael Collins,” the SpaceX launch director said as the rocket lifted off. “May the pursuit of exploration live on.”